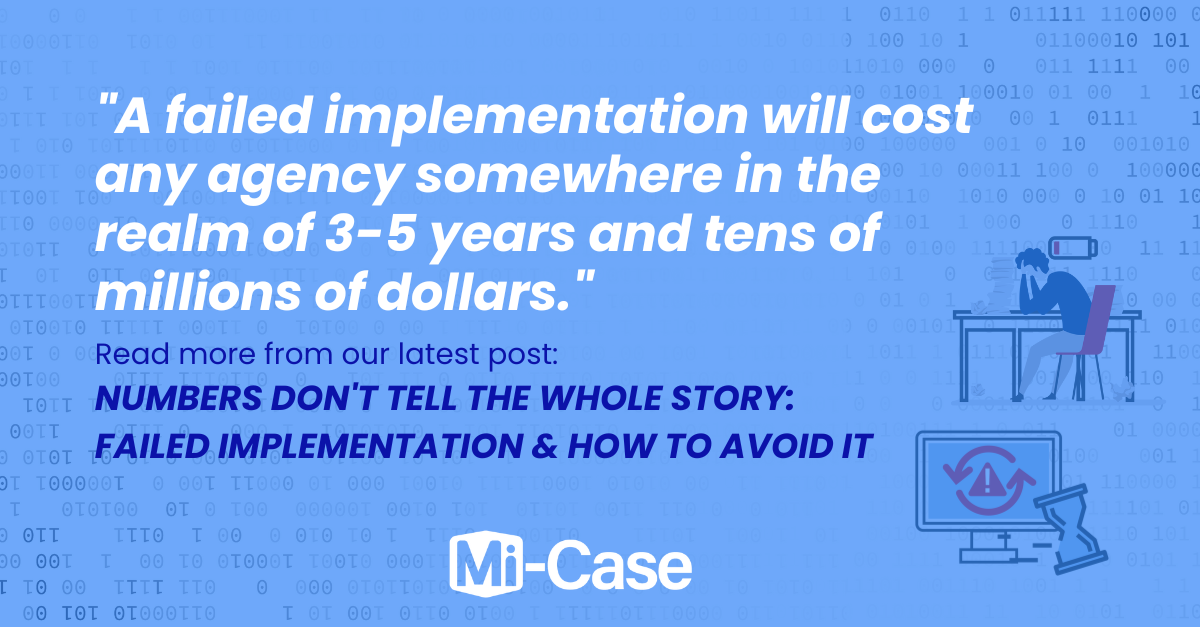 Part III: Failed Implementation & How to Avoid It

While no one ever wants to assume the worst outcome for their project, it’s time to shed light on what leads to failed OMS/JMS implementations and the consequences that follow. We’ve given lots of tips in this series on how to avoid ending up on this path, but is a “failed implementation” really something to be that worried about? And does it happen that often?

First, what is it? A failed or stalled implementation occurs when a partner selected to implement an OMS/JMS either fails to deliver on their product, exceeds budget in trying to do so, or stalls indefinitely in its timeline for full implementation. In fact, a recent study by the Standish Group concluded that only “16.2% of IT projects were deemed successful by being completed on time and budget, with all the promised functionality.” Furthermore, it concluded that a whopping 1 in 3 projects fail entirely–meaning they are canceled or abandoned.

While Mi-Case’s record holds ZERO failed implementations, our involvement in the industry has regularly brought us face to face with agencies experiencing stalled or failed implementations. In fact, one of the main reasons we produced this series is because we want to help organizations know the good things to look for and pitfalls to avoid so that this does not happen–and are aware of the dire consequences should a project fail. State Corrections and Local jails simply cannot afford for this to happen.

And while many think failure for a project of this scope can’t be an option, it is more common than you’d think. And it’s much more than just a headache.

To calculate the REAL cost of not going live with a selected partner, we must–you guessed it–look beyond just the numerical loss and factor in the other losses at stake:

If you’ve issued an RFP, you already know the time and staff hours involved simply in getting to this point. But imagine you’ve finally selected your partner, spent countless hours getting agency staff to buy-in with the forthcoming system, and then you must tell them it’s on hold indefinitely. Not only will you face disappointment, but you’ve also wasted time and energy your staff could have otherwise invested in much needed areas of your organization. And now they’re left with the reality of propping up an ailing system for years to come as you start the process all over again. Change management will also become exponentially more difficult whenever you seek to try again, as staff will struggle to believe the results will be any different the second time around.

We entitled this series “Numbers don’t tell the whole story” for a reason. As you’ve seen, there are countless other qualitative losses. But we would be remiss if we didn’t sum up the total potential loss of a failed implementation: By our estimates, a failed implementation will cost any agency somewhere in the realm of 3-5 years and tens of millions of dollars. This is because it is not only the loss of time and money for the initial failed or stalled project–but the additional time and dollars it will take to bring in a 3rd party to finish the job. This is why we often remind agencies “Choosing the right partner is simply not a choice you can make twice.”

As technology has advanced over the years, so has its ability to turn data into real results. Each year you continue to operate with an aging system your agency is missing out on valuable data and analytics that are working to drastically advance public safety. There is simply no way to capture the kind of data with the old manual systems and processes that are needed to make data driven or evidence-based decisions.  As an example, Program staff often have new and innovative programs and tools  - will a legacy system allow you to determine the impact that program has on recidivism? Or does your legacy system help your Security staff determine where gang or incidents are more likely to occur in the facilities which impacts Officer safety?  Without a modern OMS/JMS these questions are often left unanswered.

Last but not least, this will be the biggest and most embarrassing setback you face should a failed or stalled implementation occur. You spent years going through the huge process of convincing the organization and those in the executive and legislative branches to fund this new initiative. You put a whole team together, underwent a massive procurement, selected what is supposedly the best product–and then it failed. Not only have you wasted time and money–but you will face unprecedented scrutiny as those who agreed to underwrite the project become skeptical, wondering “If you couldn’t do it the first time, how can we know it will happen this time?” They will require a whole new governance system with central IT or others that will place additional burdens and time on staff to prove it will not fail a second time.

The number one reason we produced this series is to help agencies look beyond numbers and calculate all the positive signs they can look for in selecting the right partner.

While a new OMS/JMS system does carry a hefty price tag and change management investment, using the tips in this series to confidently evaluate what lies outside the numbers actually saves your agency money in the long run.

As we’ve highlighted, feeling confident that you won’t be saddled with countless unplanned change orders or software you’ve never seen because you selected a partner who uses an agile approach with ongoing testing, you can be empowered and excited about this process when you know what to look for. Once live, you’ll no longer be wasting money on a system that barely functions and drags down your employees, but rather you’ll be equipping them with innovative tools as well as comprehensive data and information that make your whole agency function more efficiently. And more importantly, provide improved Public Safety for the Officers.

The future is bright, and new functionalities and technologies are being developed every day. When these large projects go right–everyone in the state wins. The agency can become a leader among its peers, allowing its director to share with other agencies how they modernize and use data to improve public safety. It’s a true opportunity to showcase how technology can empower an organization at the community level to take the next steps in providing more cost-effective programs, treatments, and education to strategically reduce recidivism.

We hope with these tips, you will look ahead with excitement at the possibilities that exist when partnering with a company who equips you with everything you need for right now and innovates alongside you into the future. 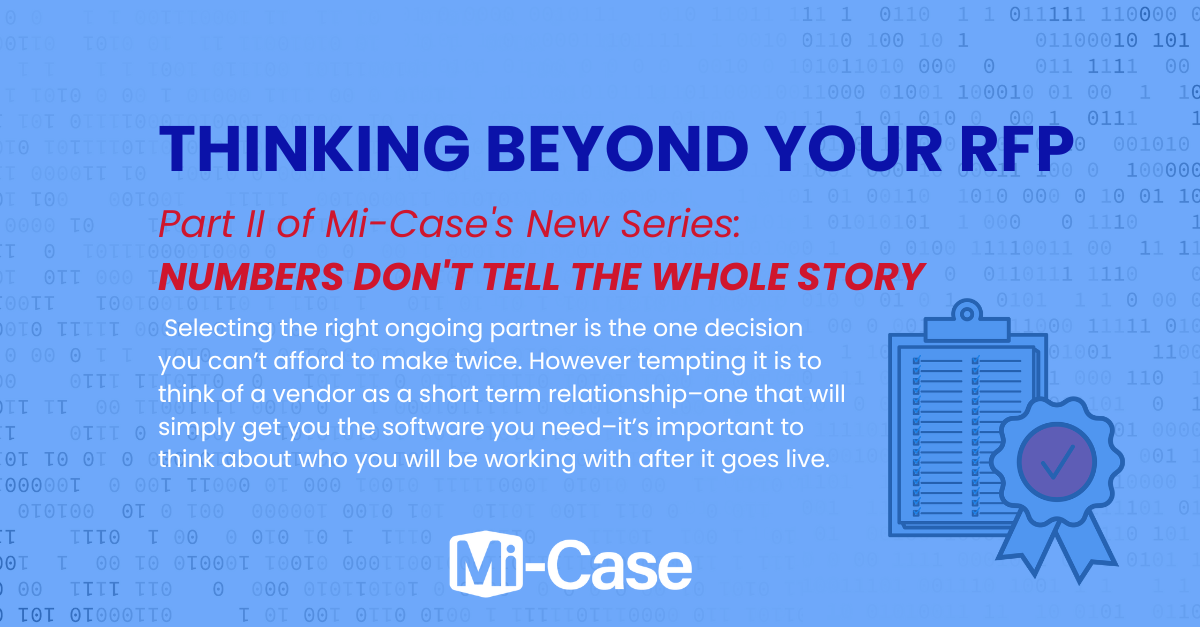 Part II: Thinking Beyond Your RFP

Why selecting the right ongoing partner is the one decision you can’t afford to make twice. 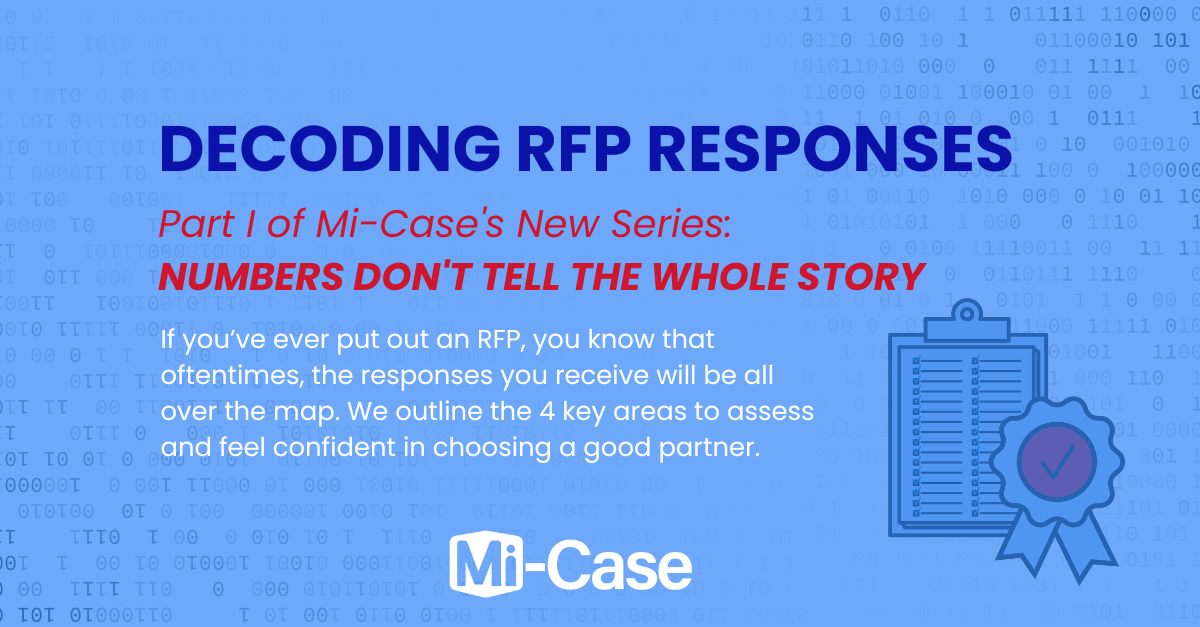 Part I: Decoding the RFP Response

Let’s look at what a good RFP response should include, and what questions might help get you to the best choice for your agency 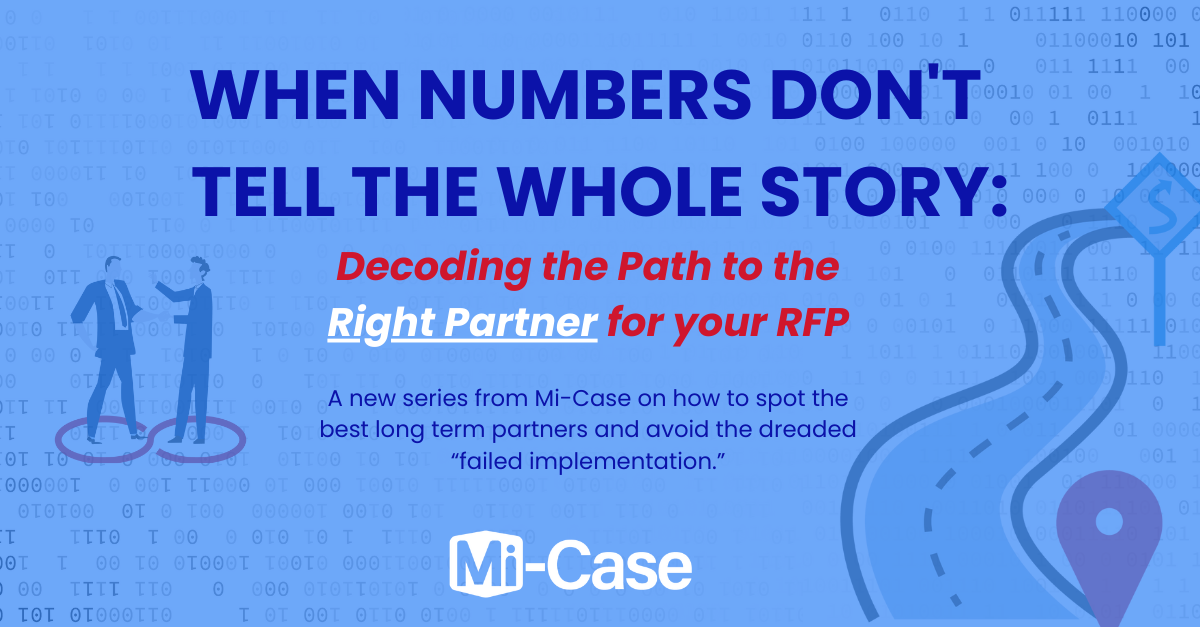 Decoding the Path to the Right Partner for your RFP - Introduction

Read Story
Featured Series
By browsing this site, you agree to the storing of cookies on your device to enhance site navigation, analyze site usage, and assist in our marketing efforts. View our Cookie Policy for more information.